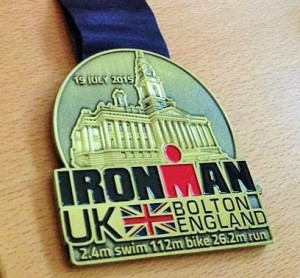 Sunday saw the UK Ironman take place in Bolton in drizzly, wet conditions, which was fine for the swim but not so good for the bike section, or the crowds for that matter. The rain was heavy and the water cold as the competitors entered the water for the 2.4 mile swim at Pennington Flash.

However, it was home success for the men and women with the top three places for both being won by Great Britain. The men’s race was won by David McNamee in a blistering time of 8 hours and 46 minutes (followed by Fraser Cartmell and Joe Skipper in second and third), and the women’s race was won by Lucy Gossage in 9 hours and 31 minutes (followed by Caroline Livesey and Alice Hector). It was a particularly impressive win for McNamee as this was his first Ironman. He was previously a member of Team GB, coming in seventh place in the much shorter Olympic distance race at the 2014 Commonwealth Games.

Around 2,000 athletes participated in the triathlon, which finished in front of crowds of supporters in Victoria Square on Sunday evening. Finishing times ranged from under 9 hours to just under 17 hours, and there was great support right until the end.

Several of our clients took part and we would like to congratulate them on being part of this epic event. Well done.

We are offering 10% discount on all physiotherapy and sports massage to those who took part. Please contact the Didsbury (Manchester) clinic for any further advice or information regarding our services.