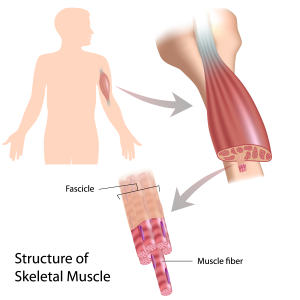 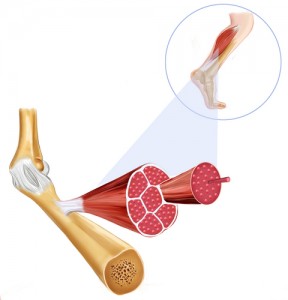 Skeletal muscle groups of the body are made up of many individual muscle fibres. Each muscle fibre is further broken down into myofibrils which contain both actin and myosin myofilaments. These myofilaments contract to shorten and lengthen muscle tissue to allow movement and generate power.  This phenomenon is known as the ‘sliding-filament theory’ causing muscle contraction.

Each muscle group is comprised of two types of muscle fibre depending upon their energy production source, execution and expenditure. The two different muscle fibres are outlined below:

Fast-twitch muscle fibres can be further divided into two categories:

The proportion of slow-twitch and fast-twitch muscles fibres within each muscle group is determined by genetics. Therefore, some people tend to be naturally gifted with certain specific types of fitness and sports. Previous research has suggested that Olympic sprinters possess approximately 80% fast twitch fibres, while elite marathon runners have 80% slow twitch fibres. No definite evidence suggests whether specific training can have an effect on the proportion of each muscle twitch fibre. However, various training programmes can influence the size, strength and capability of both slow and fast-twitch muscle fibres.

In summary, it is important that personal trainers and fitness instructors are aware of the body’s different genetic composition of both sets of muscle fibres between individuals and that they plan specific exercise regimes tailored to each individual and their sport most effectively & efficiently.

Please feel free to contact the Manchester G4 Clinic to speak to a member of the team for any questions that you may have.